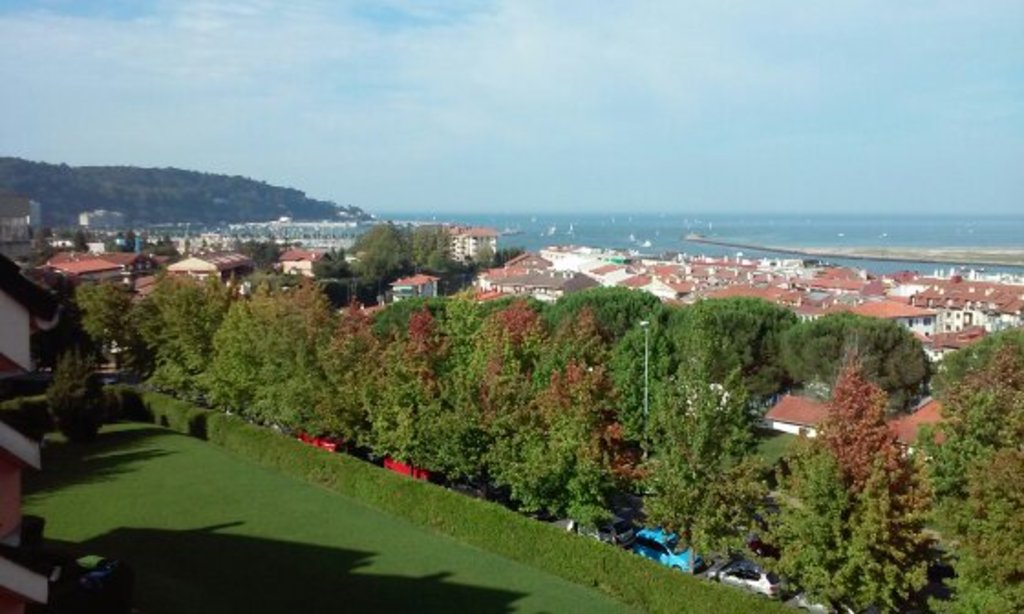 Our flat in Hondarribia is a duplex apartment, in the 4th and last floor of a one of the 4 blocks that make up a nice residential area (8 neighbours live in the block), surrounded by a private garden, facing towards the sea, on the upper part of the hilly centre of this lovely fishing town.
Hall, living room (and dining room), kitchen, 2 bedrooms and a bathroom are located in the first floor, where there are also two small terraces with superb views; the other 2 rooms and another bathroom are located in the attic. It also has a garage, with room for one car. No lift/elevators on the block, so please be aware of this if you suffer from any health problems that impede you from going up stairs. Access to the private garden and garage is always from the entrance hall.

BASQUE COUNTRY
http://www.euskoguide.com/places-basque-country/spain/san-sebastian-tourism/
The Basque Country (Euskal Herria) is a region in northern Spain and southern France, that spans from the Bay of Biscay to the western foothills of the Pyrenees Mountains

This is what made the city famous during the Belle Époque era and it is also where Queen Maria Cristina established her royal summerhouse.
La Concha BEACH, Its boardwalk is lined by an ornate white railing that has become a symbol of the city. There are, however, two other beaches in the city both of which are less posh and more relaxed: Ondarreta and Zurriola. Zurriola is also popular with surfers.
• In more recent years, San Sebastián has gained significant press for its cuisine. The city alone has 15 Michelin stars spread across 7 restaurants and famously boasts more stars per capita than anywhere else in the world other than Tokyo. Restaurants Mugaritz and Arzak have been ranked numbers 3 and 8 in the world (2012 World’s 50 Best Restaurants).If I had to pay, better Mugaritz ( or Berasategui, with incredible views…)
• San Sebastián is also famous for its pintxos. And the best place to go to try some of them is the Parte Vieja (Old Part). This is where the pintxo is king and the food is taken very seriously.
The Old Town of San Sebastián. The port area, situated in the western corner of Mount Urgull, is a nice place for sitting down and relaxing for a bit. The sunset there is magical, especially if there are sailboats in the bay that appear as silhouettes. The port also offers a great view of La Concha and Mount Igueldo.
At the far end of the port, you will find the Aquarium.
• Recommended, the scrumptious anchovies with cream of crab at 'Txepetxa' (Pescadería street, 5); and 'Zeruko' (Pescadería, 10). Indeed, 'Zeruko' bar has been awarded with the Gilda de Oro at the II International Fair of Mini-Cuisine. The winning pintxo was the following: PX Cannelloni with fungus foie gras and crispy Idiazabal wedges with shades of gold and bronze.
• Fermín calbetón street, is full of bars
• Cheaper but nice restaurants: Bideluze, Guipuzkoa square (for sandwiches), kursaal restaurant (in Kursaal),restaurants in Fermín calbeton street.
The San Telmo Museum is located in the Old Town, at the foot of the Mount Urgull. It is primarily dedicated to Basque culture and history. At the highest point of the Mount Urgull is the Mota Castle which has existed since the 12th century.
The Peine del Viento is a group of steel sculptures located at the end of Ondarreta Beach. Designed by local sculptor Eduardo Chillida, it is probably the most iconic image of San Sebastián.
The Victoria Eugenia Theater
The city hall
The Kursaal is a postmodern convention center which opened in 1999 and was designed by Rafael Moneo. It is located on the shore next the Zurriola Beach and was designed to represent “two beached rocks.”
The Miramar Palace

HONDARRIBIA: It is easy to combine a visit here with San Sebastián since it is only 20 km away. Very accessible & highly recommended. My favourite!! The town is a nice mixture of both the French and Spanish Basque Country. There is also a big beach in Hondarribia, located between the Higuer cape and the town. Hondarribia is right on the French border and it is possible to take a 10-minute boat ride to Hendaye, which is right across the bay. There is one boat every half an hour.
• Pintxos: Gran sol, ardoka, goxodenda, itsaspe bars; all of them in The marina street, in the city centre (which is full of bars).
• Nice middle prize menu restaurants: Hermandad de Pescadores, fresh fish, the best! Sebastian, in the old part of the city, main street. Gran sol restaurant.
• Expensive restaurants: Alameda, arroka berri (Michelin star)

HENDAYE: French town located right on the border with Spain, just in the other side of the river from Hondarribia. 3 km long sandy beach. The town is also full of beautiful Basque style houses and is the origin of the so called neo-basque style. its impressive castle, the Château Abbadia. The Domaine d’Abbadia is a protected natural park that comprises 64 hectares surrounding the Chateau d’Abbadia.
From Hendaye, there is a high speed line (TGV) to Paris multiple times a day, connecting the town with the French capital in 5 hours. There are also other intercity and local lines. Within the French Basque Country, there are direct trains to:
• St Jean de Luz (it takes about 12 min and costs around 3 €).
• Biarritz (it takes about 25 min and costs around 6 €).
• Bayonne (it takes about 35 min and costs around 7 €).

SaINT JEAN DE LUZ : Many of the buildings date back to the 17th century, a time when Saint Jean de Luz was one of the most important fishing ports of France. King Louis XIV of France married the King of Spain’s daughter, Maria Theresa, in St Jean de Luz in June 1660
• Rue Gambetta: shopping
• Rue Republic: restaurants and in the main square

This member has completed 5 successful exchanges. Here are some members that he exchanged with in the past: