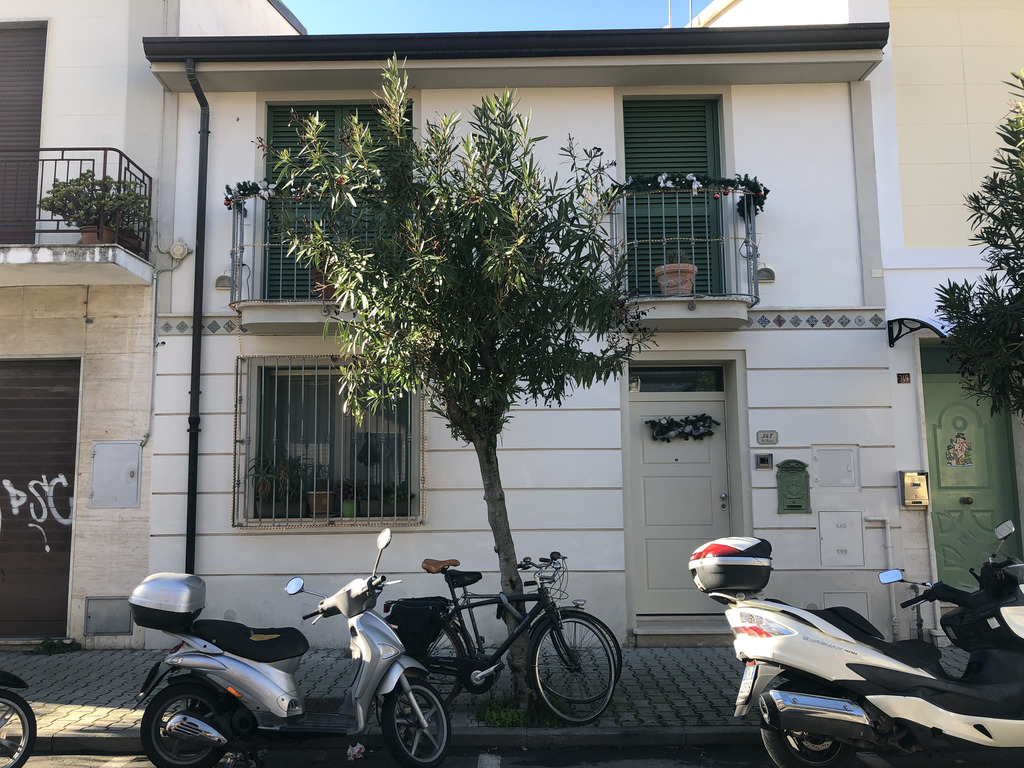 Terraced house located in the center of Viareggio ,it is 900 meters from the sea.
the house is 23 km from Pisa's airport , 20 km from Lucca and 100 km from Florence.
Viareggio is known as a seaside resort as well as being the home of the famous Carnival (dating back to 1873).
Viareggio is known for the Giacomo Puccini festival (held in torre del lago Puccini ). it takes place every summer since 1930 , between july and august , in an open -air theatre with 3,200 seats on the shore of lake Massaciuccoli.
Located on the Tyrrhenian sea , it has 10 kilometers of sandy beaches , the remaining 4 kilometers of these are pubblic beach is part of the Parco Naturale Regionale Migliarino -San Rossore -Massaciuccoli.
On October 5, 1847 Lucca was acquired by the Grand Duchy of Tuscany.
The first mention of Viareggio dates back to 1169 when a wooden tower guarding the coast was built. A little over two years later, in (1172) a military building named Turris de Via Regia was erected.
In 1848 the city adopted its current coat of arms. In these years Viareggio was the destination of many exiled intellectuals of the Italian Risorgimento who were tolerated by the local sovereigns.
During these years Viareggio's economy saw a very rapid expansion through its already recognised beach tourism and the newly expanding sailboat industry. Its population increased from 300 in 1740 to 6,549 in 1841.
The beginning of the 20th century saw again a marked development of the coast and tourism industry which determined a drastic change to most of the beach. The Passeggiata or promenade was born, with its cafés and shops, contributing to turning the city into the "Pearl of the Tyrrhenian Sea". Wood was very widely used in most building and, in 1917, a large portion of the city was lost in fire in only one night. It was only during the fascist era that wood would finally be replaced by other materials.
Today Viareggio is still a renowned seaside resort and is widely famous for its carnival and shipbuilding industry.

it's a very nice and quiet district , it's near to one of the pine forest ( 300 meters) situated in Viareggio.
in this district you can find neighborhood shops ,around 200 meters, about food (bakery shop, grocery store) about things like pharmacy , bicycle shop , laundry , hardware store.
you can find also two ice cream parlor and you can find two kind of supermarket like Conad and Esselunga, we can give you the fidelity card in order to obtain discount.

there are three of us in my family , me ( who is writing) and my parents.
my mother is called Agata she is 65 years old , my father is called Adriano and he is 71 years old.
I am Federico and i'm 31 years old and i am a college student .
we work all together in a family business that assembles mobile ice rink since 1999.
we love to travel infact we have visited many places like dubai , maldives , egypt , new york , dominican Republic and japan two years ago.
we would really love to visit California and we can't wait for the covid restriction to be eased infact we are already vaccinated so we can jump on the first plane LA bound.
we are reliable , we renovate our house from 2012.
A friend , who has used this website for many years, reccomended it to us and we are very excited about trying it out for the first time

life in Viareggio city is very relaxing because you can reach any places in town on foot or by bicycle.
Our office is near to our house about 900 meters that we reach by foot or bicycle.
Our work bring us to travel around italy (Milano , Lucca , Tuscany...) but we always come back home in winter at most three days.
we love doing long walks on the pine forest , we love also nordic walking.
we usually go to the beach on the summer.